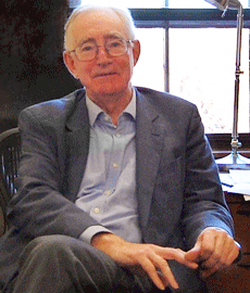 blog.klett-cotta: Sir, you are Centennial Professor at the London School of Economics and Fellow of Nuffield College, Oxford. You are Fellow of the British Academy, and you had been President of the Royal Economic Society, of the Econometric Society, of the European Economic Association and of the International Economic Association. You has been a member of the Conseil d’Analyse Economique, advising the French Prime Minister. Your book > Inequality. What Can Be Done? had just been translated by Hainer Kobler an published under the the title > Ungleichheit. Was können wir dagegen tun? in Germany by Klett Cotta. After the reviews on our blog, I often make an interview with the author of the book:

Sir Tony Atkinson: I am very happy, first that my book has been translated so well into German, and secondly to take part in this interview.

Sir Tony Atkinson:
In the past, economists did deal with issues of inequality. For classical economists, such as Ricardo, the subject of distribution was of central importance. When I was a student in the early 1960s, giants in the field, like Robert Solow, James Meade and Simon Kuznets, all studied the distribution of income and wealth. Many leading US economists were engaged at that time in designing the War on Poverty. All this changed in the 1980s, when influential economists argued that social justice was not a proper concern of economists, who should focus on efficiency and growth.

blog.klett-cotta: Could you explain this loophole in theory? One explication seems to be the data basis with allow today a better survey for example about the household incomes?

Sir Tony Atkinson: There is no doubt that there have been great improvements in the empirical database for understanding inequality. In the EU, the introduction in the 1990s of the European Household Panel, now the European Statistics on Income and Living Conditions (EU-SILC), has transformed our knowledge and allowed us to monitor poverty and inequality on a comparable basis. Globally, the work of the World Bank, UNDP, and other bodies has provided evidence about poverty and inequality world-wide.

blog.klett-cotta: It is remarquable to notice that the welfare state in Western Europe begin to fail in the eighties… Politicans didn’t realized this?

Sir Tony Atkinson: There are two main reasons why the limitations of the welfare state became apparent in the 1980s. The first is that governments began to make cuts in transfer programmes. The shift in political opinion meant that there was less support for these programmes. Under the heading of „labour market“ reform, of example, unemployment benefits were scaled back or subjected up to income tests that made them less effective in providing income security. The second reason is that the world was changing. This is particularly true of the labour market, and one of the aims of my book is to describe welfare state appropriate for the 21st century (rather than the mid-20th century).

blog.klett-cotta: Your diagnostic observes the period were > Inequality seems to drop down to find out the measures we should apply today to stop increasing inquality? Which are your main points you figure out?

Sir Tony Atkinson: I argue that, if we are to return to the lower levels of inequality that we enjoyed in the past, then a broad range of measures is necessary. It is not just a matter of reforming taxes and transfers. We have to address the inequality that arises in market incomes, both from working and from the ownership of capital.

blog.klett-cotta: Could you precise the movement today, inquality is a process, the distance between the lowest income et the highest income will growth? and generate social problems in the future…? The crucial problem is we are failing to tackle poverty, and the economy is rapidly changing to leave the majority of people behind. But this is not only a problem of income?

Sir Tony Atkinson: One of the main reasons that I wrote the book was a concern that – following the impact of Thomas Piketty’s Capital in the 21st century – attention was being focused on the top of the distribution, and that we were neglecting the problem of poverty. The EU 2020 Agenda (> Europa-2020-Ziele, H.W.) has, as one of its five principal goals, the achievement of a significant reduction in poverty. But little progress has be made, and poverty in some Member States has risen. Here poverty is indeed seen as broader than income, but income is an important means to achieving one’s life goals

blog.klett-cotta: You have studied for a long time all the aspects of inequality. Are you convinced, we can resolve theses problems. Is it an affair of the nations or of everyone of us?

Sir Tony Atkinson: In my book, I stress that it is indeed not just a matter for national governments. Local governments and communities have a role to play. As do individuals, in their capacities of workers, consumers and members of civil society, as well of course as voters. Just to give one example, a consumer has an impact by switching from a profit-maximising bank that pays exorbitant salaries to a mutual savings bank.

blog.klett-cotta: Among your 15 proposals you mention also the technology and the human contribution. Why and in which way our government should reconsider the promotion of technical changes?

Sir Tony Atkinson:
I was arguing against the widespread view that technological change is outside our control. In fact it results from decisions and we have to ask who makes those decisions. Why are we investing so much in driver-less cars and lorries? Why do we not invest more in robotic technology to help the elderly in their homes? I am not suggesting that the government should make technical choices, but that it should determine the priorities in terms of social value.

blog.klett-cotta: Another proposal concern public investments to create jobs. Do you not trust a bit too much in the action of our governments?

Sir Tony Atkinson: This is far from a new idea. The US Congress passed such a bill in 1978. Of course, there are good and bad job creation programmes, and they have to be carefully designed. But we should be making more use of the power of the government to set standards, standards that have to be emulated by the private aector
blog.klett-cotta: Income taxes should consider a peak value of 65 % for the highest income and you would like to introduce a property tax… Do you have in mind a concrete reform of the tax system. Could you imagine a tax system for the European Union?

Sir Tony Atkinson: My first concern is that we have to re-habilitate taxation. As Joseph Schumpeter argued in 1919, the capitalist system can only survive in the long run if it can raise sufficient taxation. Or, as the US Internal Revenue Service has inscribed on its building, taxes are the price we pay for civilisation. There are major reasons why taxes have to rise: the ageing of the population, the need to tackle climate change, the deteriorating state of infrastructure. The question is who pays these higher taxes. Here we should, in my view, reverse the decline in progression since the 1980s.

blog.klett-cotta: I’m right to suppose that your proposal should not be a theoretical contribution to economics?

Sir Tony Atkinson: In fact, underlying my analysis of the causes of inequality is a critique of mainstream economics. The economics on which much policy is based has failed to embody the developments that have taken place in past decades. As such, it is not adequate to discuss the problem of inequality. The textbook story is based on identical consumers and workers, who buy their goods from and work for firms that are perfectly competitive. In the real world, people do not start from a level playing field; they have conflicting interests; and firms have extensive monopoly power that they employ to raise prices and to exploit their workers (for example via zero hours contracts).

blog.klett-cotta: Our governeents depend much more of the rhythm of elections systems, they have difficulties to make a long term planning. How do you evaluate the chance that any or all of your proposals could be realized?

Sir Tony Atkinson: I was indeed writing for the medium and long-run. I hope that the analysis and the concrete proposals will feed into a continuing debate, and that, when the time is ripe, people will pull the book from their shelves and re-read it. But there has already been considerable impact on political discussion. This is most evident in the case of a universal basic income, where many people have been contributing to placing it on the agenda. It applies also to ideas where I am bringing something new, such as that criteria of social justice should be applied in the operation of anti- monopoly policy (taken up by the Australian Labor Party).
Sir Tony Atkinson:

blog.klett-cotta: Thank you so much.